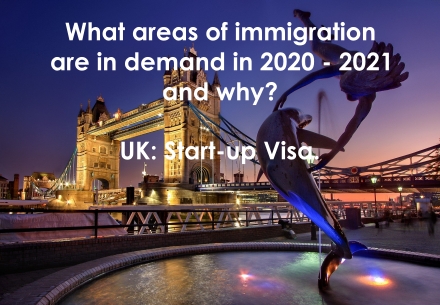 If you rely on experts in the field of startups, then the UK is ranked 5th in the top ten start-up - friendly countries in the world, after Japan, Germany, the United States and Switzerland.

It is an undeniable fact that the UK is home to world class universities and one of the world's centers of attraction for talented businessmen and investors. It is no coincidence that 7 out of 10 leading venture capital funds in Europe are located here. And it is in the UK that 37% of all European startups, whose value exceeds $ 1 billion, have taken root.

It only remains to answer two questions: what is necessary for the UK to open its doors to the founder of the next innovative project? And won't the situation change after Brexit?

An applicant can apply for a Start-up visa if:

- there is a desire to create a business in the UK,

- the business idea has received the approval (authorisation) of the authorised agency,

- the candidate has turned 18 years old at the time of application,

- the level of knowledge of the English language corresponds to B2,

- the necessary financial support for both the candidate and dependent members of his family is available. Moreover, this financial support is not related to the implementation of the project, but only concerns the coverage of living expenses.

For authorisation, the applicant must prove that his idea is:

- with potential for growth.

It is no secret that authorisation agencies always scrutinise (evaluate) proposed projects using their own criteria. Moreover, if the agency gives approval to the project, then it must and will support it in the implementation process, controlling (from the point of view of the immigration authorities) business development.

Authorised agencies have the right to revoke an authorisation at any time and thereby initiate the cancellation process for an already issued visa.

Consideration of documents for a Startup visa is very shortly (by immigration standards) and takes about 3 months.

The UK authorities expect Start-up and Innovator visas to become platforms for attracting talented businessmen and investors in 2020-2021.

As for Start-up projects after Brexit. There are several reasons for optimism here. The success of a tech startup always depends on three critical ingredients: access to capital, access to talent, and access to markets. After Brexit, the UK will maintain good positions in all three positions. However, leaving the EU will change the UK's comparative advantage and determine which startups can thrive in the country's ecosystem.

London will remain the venture capital metropolitan of Europe. According to KPMG, the UK had more than double the amount of venture capital involved than Germany. London remains an obvious destination for international funds seeking a European headquarters, as evidenced by SoftBank's presence in the UK. After the referendum, leading Silicon Valley funds have invested heavily in globally ambitious British companies.

British Business Bank - the British state bank tasked with providing loans to small and medium-sized businesses - is replenishing with new money and has taken over much of the shortfall left by the European Investment Fund.